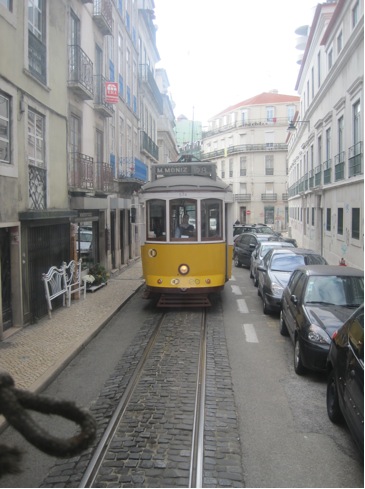 Spent the afternoon walking around the old city and Las Ramblas. Some nice stores and liked the little artists stalls just a block away from Las Ramblas.

Toured the W and had drinks up on the top floor. Fabulous views of the city at night up there. Dinner at their casual restaurant. The food was good, but nothing special.

The rooms at the W were large and comfortable. They all have window benches overlooking the water. I loved sitting on the window bench and looking out at the sea. The bed was comfortable, but the bathroom was only okay. The sink was large and left no room for your stuff, but it was outside in the room. The shower was large, but the towel rack was at the back, so you had to go into the wet shower to hang your towels after you were dry. The pool area was fabulous, large with lots of places to sit out. Would be great for a family. There is a beach right down below where they can provide chairs to sit on. The lobby was large with lots of places to sit down. Also if someone likes to go for a jog or a walk, it was nice to stroll along the waterfront. The location was away from the shopping and sightseeing, but the cab ride was cheap. About 5 euros tops.

We had a half day tour of Barcelona. We spent quite a bit of time at the Sagradia Familia. Both inside and outside. It was fascinating. We also went up to the top of the hill where he history museum is, former sight of the world’s fair and Olympics. Great view. We then walked Las Ramblas and the old quarter. We even went in the old market. Didn’t get a chance to eat anything, but you can. We did a lot in half a day. Went on our own to one of the Guadi apartments. The roof top was the coolest part.

Lunch was at a fancy wine bar called Mon Vinic. Great food and wonderful wines for anyone who likes local food with a new twists.

Dinner at Le Meridien. The Lobby was strange, we bad music. The standard rooms were on the smaller side, but the rooms with the terraces were great. Wonderful location. Dinner there was fine.

Left Barcelona via train for Madrid. The train was comfortable. The station was okay to navigate, but you have to be able to move your luggage off and on the train by your selves. They served a meal in first class, but it was pretty bad.

Arrived at the Palace Madrid. It is so close to the train station, you could almost walk it.

The hotel is lovely. The reception area is beautiful with murals. The sittings areas are stately. The room was large and comfortable. The bathroom had double sinks, shower in tub and toilet a bit set back. Lots of closet space and a nice chair to sit in. Comfortable bed to sleep in. You have to ask permission to open your door out on your French balcony for insurance purposes.

Had dinner at a nice at a local restaurant. It had a lot of atmosphere and the food was tasty. Very traditional food.

Whole day tour of the palace and the Prado. As it was Sunday we did stop in the flea market, which was huge and spread out. It was fun to see. A variety of old and new things. The Palace was wonderful. Worth going to see. The Prado was fine a must for a short time.

Lunch stop at a local restaurant with Made for Spain people. The food was good, but you have to like local foods. Excellent calamari.

Dinner at the hotel was good. Had drinks in the bar before hand. It was good, but expensive.

Drive up to Rioja with a stop in Lerma. Once we got out of Madrid, it seemed an easy drive on the highway. Roads were well marked and they didn’t seem to drive too fast.

Stopped in Lerma to see the Parador. It was a cool old castle. Very scenic in a small town with narrow streets and a big square. It would be a nice stop for lunch. The food was a bit odd, but I think it was the menu they choose for us.

Arrived at the Marques des Riscal. It is truly unique and fabulous. The contrast with the modern building, the vineyards with the beautiful leaves changing colors and the old medieval town.

Toured the hotel. It has a lot of facilities for a small hotel. The spa looked lovely with a big indoor pool, hot tub, steam room and a lot of treatment rooms. There are two major restaurants, a nice library to hang out in and a lot of outdoor space to sit out in when the weather is nice. The rooms in the original building are odd shaped and the bathrooms were more cramped. The rooms in the spa building were great. Large and comfortable. Lots of places to sit and all sorts of light controls. The bed was kind of hard. The bathroom was great. Big double sink, separate large tub, walk in shower, separate toilet and a big closet. Again gorgeous views. It was a like a picture postcard.

We had dinner in the more casual restaurant The dinner was good. We had a nice modern twist on local foods.

Tour of part of the Rioja area. We went to the monestary that was so interesting. The place they found the first written Spanish. If you don’t go with a guide, they only speak Spanish. Our guide translated what they said. We then went to see the Cathedral… This pilgrems still come through their way to Santiogo des campestello. We say the dorms that house them.

We had lunch at another parador. Not as interesting as Lerma.

We did an hour tour of the winery at the hotel. It was very interesting. We got right up close to the machines, bottles and old wine cellar.

Dinner tonight in the fancy restaurant. We had the memory meal, that was fabulous.

Left from Bilbao for flight to Lisbon. It took about 75 minutes in the rain.

The flight was okay, but on a smaller plane.

Arrived into Lisbon and taken to the Sheraton. It is in a fabulous location with a recent renovation. For a mid-range property this is very good. The rooms looked comfy, but not too big. The club level lounge was nice with lots of amenties. It has a nice outdoor pool and sun deck. Good work out facilities and a spa. WE had lunch at the top in their restaurant. It was good, with great desserts.

The drive to Evora was just over an hour. Again it seemed easy, if someone wanted to drive themselves.

The hotel has a fabulous old church that is still used once a month for services. The rooms are a bit spread out. They all have terraces or balconies. The standard rooms have traditional décor it was okay in sive.Then there are designer suites which are a bit larger with strange modern paintings. There are some unique suites in the old building for a special occasion. The spa has a nice indoor pool, that was kind of cold. The spa treatments only got a mixed review. The bathrooms are okay. The sink area was kind of short on space. There is a separate tub and shower. You have to be okay walking far to your room as it is spread out. There is an outdoor pool, playground and tennis courts. Again the bed was kind of hard.

Dinner was good at their restaurant.

Wine tour of a local winery. Very similar tour to the one in Rioja. They also had olive oil that was fabulous and their wines were good as well.

We had a cooking lesson in the bar at the hotel. It was fun to learn knife skills with the chef. We ate what we cooked. It was good, but fishy.

Afternoon walking tour of Evora. We saw a church made out of bones. Very creepy. They also have a cathedral and old roman ruins of a temple. The town was okay. It had some nice shops and cute cafes to sit out in.

We had dinner with local specialties in an old horse carriage house that was made to look kind of like a farm house. After dinner the people that run it sang old Portugess songs. It was special.

Drive back to Lisbon.

Stayed at the Four Seasons. Close to where the Sheraton is. Great location by a park and one of the main statues. The lobby and lounge area were fabulous. The best chocolate cookies with the coffee.

The rooms were large and comfortable. The bathroom again with double sink, separate shower, tub and even toilet. Lots of room and balconies overlooking the park that you can sit out on. Nice spa and workout room, with great views of the city. Did not eat at the restaurant.

We did our own self guided tour, with advice from Henri at the FS. We took tram 28, with the locals and other tourists. What an experience going up and down the hills in the old tram. We stopped in the Chiad area and at a famous café and shopped at the famous glove shop.

We continued up the hill for more fabulous views of the city. Made the three block walk almost straight up to the old castle grounds. It was great to walk around the old castle and up on the old walls. You have to be good at stairs to walk up on the walls.

Dinner at a local restaurant not far from where we had lunch.

Lisbon is very hilly, like San Francisco. The streets are very narrow in the old parts.

Head home. On a Saturday morning with no traffic, we were about 15 minutes from the airport. Very convenient.